Gods are everywhere and exist in various forms, Their definition is no longer what We used to perceive: an omnipotent, most powerful higher form. Now we have human “gods”. Some believe in multiple gods. Yet all these beliefs are for the same reason: Longing for the absolute truth.

If a god exists, then their rule is immutable; all creations must submit. There’s no other way. But since we have so many -alleged- gods with contradicting rules and laws, we are far away from absolution. I’ll introduce you to a new god: Meek. 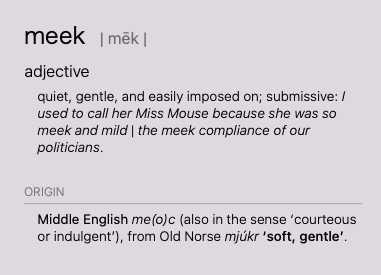 Definition of the word “meek"​. Meek is a god. He is no different from all other gods that -allegedly- exist. A god is absolute; his judgment is correct. Correctness is defined by what a god defines and does. However, if there are more than a god, their correctnesses may and do contradict. Thus we have multiple absolute truths; and that is not correct.

“I think I’m gonna start my own religion;
It seems to be the recipe for a new sensation
I think it’s gonna make a trendy revolution
Quite the contribution to the unnatural selection”
— Marko Saaresto

We judge things by logic. Logic, or sometimes referred to as Reason is absolute. It’s something we primitively use to judge, evaluate and justify. It’s the way we were created that made us abide by this “Logic”. It requires nothing to produce output but simple info percept by our organs and experiences. And this logic doesn’t deem two contradicting entities the same.

The whole problem lies in the article “A”; To be absolute, immutable, omnipotent. The article “A” cannot be used with such entity. Only article “The” must be used to denote the uniqueness, absolution, and omnipotence of such entity. Thus being the absolute source of truth. The one true and only worthy ruler of all that exists.

Much different from Meek; Meek is a competitor, Meek can be forced to submit to a higher god. Meek has partial command of things. Meek is a powerful entity, but not the only one, and most definitely not the strongest—He is meek.

The God is the only ruler. His rules no matter how we may perceive are absolute and correct. A man can not judge the deeds of The God as right or wrong. The God does his deeds.

Right and wrong, defined by The God, are for humans to evaluate human actions against The Godly Law. Not to evaluate the maker of rules. Even if humans tried to judge their Judge, it will not affect Him in any possible way. Such there is the might of The God. No matter how we drown deep in hubris, our fate is sealed. our roles are predefined. our deeds are evaluated. And we’ll be subjected to the consequences of our actions.

Allah has never had ˹any˺ offspring, nor is there any god besides Him. Otherwise, each god would have taken away what he created, and they would have tried to dominate one another…
— Chapter 23 (The Believers).

We may choose to resent this truth, We may choose not to accept it as a truth, but that will only affect our counted breaths on this earth, but won’t change anything for The God. Or for our terminal, eternal, fate.

Without The God, everything is relative, everything can be swayed and manipulated. Our coincidental existence is in vain. Our free will is limitless, if governed by no higher (super-human) rules, is uncontrollable and completely justifiable. Such purposeless, chaotic, full-of-struggle life is worthless. I shall then use my free will to put an end to my perception of this boring, doomed, fruitless, Night; Such is our Night—The Unhappy Folk.

Such there is Night، not Night as ours—Unhappy Folk
— J.R.R. Tolkien.